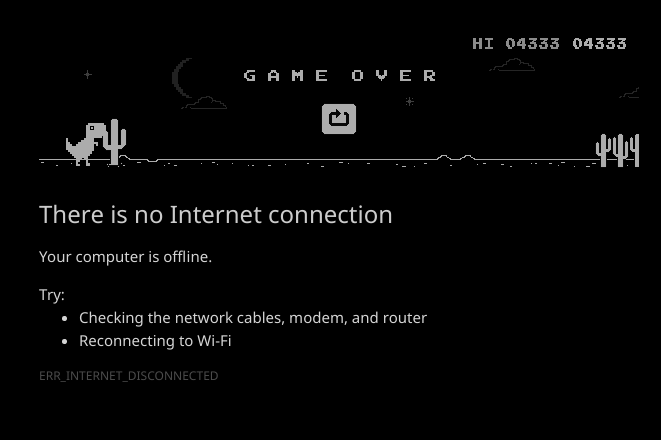 Dinosaur is old enough, as well as Lisp, they may like each other. When I am talking about dinosaur here, I mean the dinosaur hiding in Google Chrome, it shows up when "There is no Internet connection".

What's This All about?

This is about writing some code in Common Lisp, which is capable of playing the Chrome Dinosaur Game itself (no Deep Learning involved).

What Do We Have in Hand?

When I'm trying to do this, I'm sitting in front of a computer with Linux installed, and of course it has a screen monitor. So, it is easy to set up a Common Lisp environment, here is my list:

I also installed Emacs with SLIME to play around with Lisp, you can have any other editor instead of this.

It's easy for us to recognize the dinosaur, a tiny cute creature with two short legs running on our screen, but it's not easy for Lisp. We can see the screen with our eyes, Lisp can't, so we gonna write some code to read the screen, and find the dinosaur.

After searching the web, I found that there's no concept of Screen in Common Lisp. Actually, I found this:

... There are only rudimentary libraries for manipulating strings, and almost none for talking to the operating system. For historical reasons, Common Lisp tries to pretend that the OS doesn't exist ...

But since that article is written in May 2001, it's been 15 years later, things must have been changed a lot. After digging around again, I found something very useful:

Actually, there's plenty of libraries out there today, you can basically do anything you want in Common Lisp, the OS does exist! Hooray~

After reading the CLX Manual, we found that we can use function get-raw-image to directly get the image data from the specific region. Then what? Let's find out what we need to find the dinosaur:

But I've been over it almost immediately, cause I have no need to read those obscure papers anymore, phew~

All we have to do about this dinosaur now, is to determine the current state of our dinosaur: STANDing / JUMPing / BENDing (yah, it can bend, try the down key).

Since the dinosaur never really moved forward or back, we can take screenshots of the different postures of our dinosaur, then open them in GIMP to get the corresponding position points, we can do this in our code:

After we have these points, we can capture the image data of current screen, then get the colors of those specific dots, and determine if the color equals to the color of dinosaur, if all *dino-standing-points* matched, then it is standing, as well as *dino-bending-points*, otherwise it is jumping.

These front cactuses and birds could kill our dinosaur. So we have to detect them and take an action of JUMP / BEND or just STAND still (the time of action also matters). We can get the image data in front of the dinosaur, and check if there is a cactus or bird:

The search area could be narrowed down to a 500x35 square, and the position of this square is fixed, we can easily get it from a full screenshot with GIMP. Then we can write something like this:

And when we get the image data of this area, then compare the background color with each pixel, if it does not match, then the cactus or bird is found!

When we comparing the pixels, we choose to scan the image from left/top to right/bottom, then we will get the top/left position of the front cactus or bird.

Here are the cactuses and birds I collected (some kind of cactuses may be missed):

Actually, the types of cactus make nothing different, no matter it is tall or short, wide or narrow, it will be successfully passed if we jump at the appropriate time. But for the birds, we should separate them out by LOW / MIDDLE / HIGH, when it is LOW type bird, we JUMP; when it is MIDDLE type bird, we BEND, when it is HIGH type bird, we do nothing.

From the image above, we can see that those birds in different types have unique y-coordinates among themselves and cactuses, we can just tell which kind of bird it is by the value of it's y-coordinate.

Actually, all we need is the unique y-coordinate of the MIDDLE type bird, cause we can treat the LOW type bird the same as cactuses, and the HIGH type bird, we just pretend they never exist (cause we gonna ignore them). So, all we need is:

Now, here's what we got:

It's HOW and WHEN, how to perform the JUMP or BEND action, and when to perform that action. Let's discuss them next.

To jump or bend our dinosaur, we need to simulate the key press event of SPACE (or UP) and DOWN.

After reading the CLX Manual, we found a section called: Event and Input, it's all about events manipulating, we may use them. But after talking with some awesome fellas on IRC, I learned that there's an extension of X Window System called XTEST, which is "a minimal set of client and server extensions required to completely test the X11 server with no user intervention", and it has an operation called XTestFakeInput which can be used to perform a fake key/mouse input as it is said by it's name.

And more luckily, this extension is already implemented in CLX, so we can directly call the function fake-key-event or fake-button-event, they should just work! What a good day~ Now we can call something like this in the REPL:

Then the dinosaur jumped, :-D

We should start to jump when we getting close to the cactus or bird, but how close? 100px? or 200px? should we test all these values and find the best one? No, there's no one. We can't say "Hey tiny dino, you should jump when the distance between you and the cactus in front is less than 100px", because the speed is accelerating. Maybe 100px works pretty well when it is slow, but when the game speed up, the value should be far more than 100px.

So, it is speed related, huh~ Since we can get the coordinates of the front cactus, calculate the speed will be done by dividing the change of x-coordinate by time passed, we can collect all the speed value each time we read the screen, then get the average value. Then we should figure out something like this:

Then, we can read the screen 60 times per second, and call jump? in every screen reading action, to check if we should jump.

After playing around with all the code snippets in SLIME-REPL, seems all systems go:

Just do a little more clean up, we'll have a Common Lisp-powered Super Dinosaur~

Now, we won't go through the details of the code implementation, you can find them at the end of this page.

Before we go, I wanna say: Lisp is not the old fragile useless academic language, also, it's not any alien super power. It's a language, it works if you really touched it, and works great.

I am pretty new to Common Lisp, the code may be a little messy (although I tried not to be like that), it will be great if you can point out something inelegant for me, thanks!